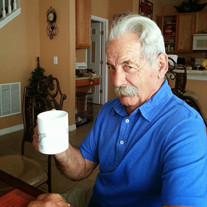 Anthony Patrick Salvato, 84, of Saint Cloud, Florida, passed away peacefully on Saturday, January 18, 2020 at his residence surrounded by family. He was born on December 24, 1935 to Carmine and Philomena Salvato in Brooklyn, New York. Anthony was a loving father of four children and husband to Gail Salvato. His source of greatest pride was his many grandchildren he shared with Gail. Anthony served in the Navy Reserves and was the successful owner of Salvato Carpets for over 50 years. His talent for flooring was described by many people as a work of art. Along the way, he shared his gifts instilling his expertise in those that were lucky enough to learn from him. Although Anthony was a successful businessman, he was an even more successful family man. This was simply because family was his passion. He valued the time he got to spend with them. Whether it was a life changing event such as a wedding or a simple cup of coffee, to him, all time spent together was precious. To know Anthony was to be his friend. His gift for storytelling left all those who listened with a smile on their face and a yearning to know more. He was always willing to help and was truly selfless when someone was in need. It was often said, “He would give you the shirt off his back.” To his grandchildren he was called many things: Pop, Grandpa, partner in crime. He was always willing to play, tell jokes and be an endless source of fun. As his grandchildren grew older, he became a listening ear and guide on their journey. There was never a moment where his grandkids weren’t overjoyed to see him. Anthony Salvato was a true blessing to all who knew him and will be greatly missed by many. Anthony is survived by his wife Gail Salvato; his children: Faith Salvato, Michael Salvato and Nicholas Salvato; grandchildren: Michael Salvato Jr., Dominick Salvato, Nicolette Salvato, Tyson Salvato, David Salvato, Jordan Salvato, Anthony Salvato, Gianni Salvato, Evelina Barboza Salvato, Isabella Barboza Salvato, and Daniel Salvato; daughter-in law: Elizabeth Salvato; nieces and nephews: Victoria Kingdon, Susan Salvato, Stephen Salvato, Mary Ann Nelson, Robert Salvato, John Salvato. Anthony is preceded in death by his parents Carmine and Philomena Salvato; stepmother: Theresa Salvato; brothers: Angelo Salvato and Ronald Salvato; son: Adam Salvato, great nephew: Stephen Kingdon. A memorial service will be held on Friday, January 24th at Neptune Road Baptist Church at 6:00 PM. - 1620 Neptune Road Kissimmee, Florida 34744

Anthony Patrick Salvato, 84, of Saint Cloud, Florida, passed away peacefully on Saturday, January 18, 2020 at his residence surrounded by family. He was born on December 24, 1935 to Carmine and Philomena Salvato in Brooklyn, New York. Anthony... View Obituary & Service Information

The family of Anthony Patrick Salvato created this Life Tributes page to make it easy to share your memories.

Send flowers to the Salvato family.