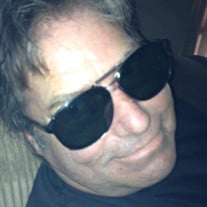 As I sit in heaven and watch you everyday, I try to let you know with signs that I never went away... I hear you when you're laughing and watch you when you sleep, I even place my arms around you to calm you as you weep. I see you wish the days away, begging to have me home, so I try to send you signs, so you know you are not alone. Don't feel guilty that you have life that was denied to me, heaven is truly beautiful, just you wait and see. So live your life, laugh again, enjoy yourself, be free... Then I know with every breath you take, you'll be taking one for me... Anthony S. Neal, 61 years young of St. Cloud, FL, passed away on Monday, August 21st 2017 after a long, struggling battle with Cancer. He had a fulfilling life filled with love from his surviving wife, JoAnna Neal of 43 years. He is survived by his son, Travis Neal and girlfriend, Stacy Harwood. His daughter, Brandi Simmons and boyfriend, Jeffrey Spencer. His grandchildren, Elliott Simmons, Zoey Simmons, Jolie Neal and Eleah Neal. His two sisters; Blaire Floyd and husband, Stanley. Terri Neal and partner, Lori. His brothers; Biff Neal and wife, Tania; Ric Neal and wife, Katie. His sister-in-law, Linda Wiemer. His brother-in-law, Tom Oakley and wife, Elsie, brother-in-law, Jim Oakley and wife, Linda; brother-in-law Michael Oakley and wife, Sherri and his brother-in-law Charles Oakley and wife, Valerie. He had many loving nieces and nephews. Known to his friends and family as Tony, he enjoyed the simple life and hobbies included playing horseshoes, watching his Miami Dolphins play football, listening to old time country gold on the radio, fishing, golfing and joy riding in his Convertible Cadillac. Tony knew not a single stranger, and would willingly give anyone the shirt off his back if needed. His smile was contagious and his "preaching" was welcomed by anyone lucky enough to get one. He was someone who many looked up to. The type to tell it like it is, and his hard love approach was hugely respected. He was a man of pride and the take charge type. His wisdom and lessons he shared with his loved ones will always be cherished. Tony was a hard worker. He took great pride in his Construction business of nearly 30 years specializing in commercial drywall. His life was a legacy, he was a hero to some, the fight and will to hold on was proof that he was a man unlike most...giving up was never his option and he will stay very much alive in everyone he knew. Arrangements under the care of Fisk Funeral Home & Crematory, 1107 Massachusetts Avenue, St. Cloud, FL 34769 (407) 892-2155

As I sit in heaven and watch you everyday, I try to let you know with signs that I never went away... I hear you when you're laughing and watch you when you sleep, I even place my arms around you to calm you as you weep. I see you wish the days... View Obituary & Service Information

The family of Anthony S. Neal created this Life Tributes page to make it easy to share your memories.

As I sit in heaven and watch you everyday, I try to let you know...

Send flowers to the Neal family.