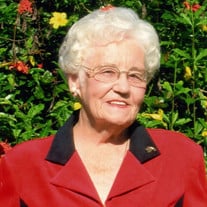 Mom began life’s journey on January 5, 1928, first born of Louis Knoebel, an immigrant from Austria, and Evalyn Legretta (Swearingen) Knoebel, in Conway, Florida. Five other children were added to the family in subsequent years. Benny (Buddy)Louis, Evalyn Alberta (Baby Brunk), Carl, Millie Elizabeth (Millie Tripp), and Edward Spencer. Mom was often sick as a child and missed a lot of school because she was ill so often. At 14 she was sent to Ohio with family friends in hopes it would improve her health. When she was in the 9th Grade she had to drop out to work and help provide for the family. She worked at a boarding house and at Geriatrics Manor in St. Cloud. She lived in St. Cloud during the week and went home on weekends. She lived with Christine Gaunt in town and Cristine took her to church. It was during this time she was baptized. One day her grandpa had visitors. Mr. Platt and two of his sons had come down to go hunting. She and George took a liking to one another. He went into the Navy, and they were long distance sweethearts until he was discharged. They were married February 22, 1948. 1948 was a very busy year for the young couple, on December 14 she had a bouncing baby boy, William (Billy)Louis. Carl Richard joined the family 21 months later on September 17, 1950. Edith (Edie) Marie came along December 13, 1951. Followed by Mary Paulette on September 26, 1953, and Michael George on November 9, 1954. Lastly, she gave life to Joy Ann four years later, on October 13. She spent the next 18 years raising children. They moved back to Saint Cloud in 1966. The first love of her life died at 46 and she got a job outside the home for the first time in many years, as a bus driver. One regret she had was that she didn’t get to finish high school, so after daddy died, she went to night school and got her high school diploma. Graduating the same year her baby graduated. Not long after, she met Author Brady at a party and they married on October 16,1976. With Mr. Brady she got to do a lot of traveling which she always enjoyed. He passed away three years later, and mom was once again a widow. Along with children eventually came grandchildren and great grandchildren. She loved being a grandmother and they loved listening to her stories. She had a total of 14 grandchildren, 18 great grandchildren and 9 great-great- grandchildren. As well as a plethora of step-children, grandchildren and great grandchildren. She spent the next portion of her life taking care of elderly aunts who needed her. She stayed with Aunt Becky and Uncle Ben Swearingen and Uncle Ed and Aunt Maria respectively. After Aunt Maria went into a nursing home Mom returned to the Farm to live with Aunt Annie, she began bowling on a league at the Orange Bowl Lanes. This was only one of her favorite activities. She also loved to square dance. She had a green thumb and could grow anything, but she loved her African Violets. She enjoyed and sewing from the time she was a young girl and crocheting, but most of all she loved making jelly and cooking for people. “For People” was a key component in mom’s life. When she sewed it was usually a gift or something someone ask her to make. She made dresses for girls in Little Miss Osceola, western shirts, even dungarees. Mike had her make sweat bands for his crew at one time. She crocheted baby blankets for all her many grand-children and great grand-children. She crocheted bed spreads and table clothes. She crocheted kitchen towels and even cowboy hat earrings. During this time she also enjoyed the company of Roy Turner who lived down the street. Today we would call him her plus one. As they got older she cared for him and Aunt Annie and other elderly people in the neighborhood. She helped by cooking meals doing their wash, cleaning, taking them to doctor’s appointments and to the grocery store. After Aunt Annie and Mr. Turner passed she caught the eye of an old friend from her school years. She and Milt Campbell began dating in March of her 80th year and were married in June. They were like teenagers in love. They took a 6 week honeymoon traveling the United States from East to West and back, spending time with family and friends along the way. They saw Yellowstone, Builtmore House, Dollywood, the Corn Palace and all places in between. She was extremely happy during this time. Sadly, Milt developed pancreatic cancer and their precious time together was cut short. She returned home to the Farm. While married to Milt she became active in the Odd Fellows and Rebeckas. She enjoyed being a part of both these orders, which center around helping others. One thing they do is a blood drive dinner every other month. Milt cooked steaks and the other food and she made pecan and key lime chiffon pies for those who donated blood. She continued making pies for the blood bank as long as she could stand. After Milt went to be with Jesus she moved back to the Farm. There mom continued to sew, crochet, grow plants and flowers, make jelly and pies; all for others as well as her own enjoyment. Mom spent her life serving others, often in difficult circumstances. She never met a person she did not like and rarely did anyone leave after visiting without a jar of jelly, or some other small gift she had made. After falling and breaking her hip on July 3, 2019 she struggled to walk she was in severe pain most of the time. This began a slow decline that ended November 18, 2020. She was truly a Proverbs 31 woman. Her children rise up and call her blessed.

The family of Annie Marie Campbell created this Life Tributes page to make it easy to share your memories.

Send flowers to the Campbell family.